Oliver’s Game – Where a story comes from 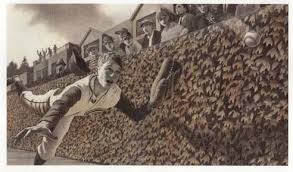 Having a son who eats, breathes, and sleeps baseball, my eye catches books about the game.  Historical fiction is a favorite genre of mine, so Oliver’s Game was a treasure find.  I was even more thrilled when I noticed the Chicago Cubs were featured.

“Oliver Hall loved baseball. …and he loved listening to Grandpa Hall’s wonderful stories about what he called the Golden Age of the Game.”

The story begins with Oliver finding a Chicago Cub’s uniform in an old trunk.  “Every item in this shop has a story to tell,” Grandpa Hall would say. After questioning his grandpa, Grandpa shares his story through a flashback.  He was 18 and asked to practice with the Cub team at the end of the Cub’s season.  Matt Tavares explodes the moment when ‘the rookie’ hits the ball.  You can feel his spirits soaring as his dream was coming true.

But the story takes a turn when World War II begins.  He joins the marines.  Upon turning the page, you see a young uniformed soldier on crutches in the dug out.  Your spirit as a reader cringes when you read, “After that, I stayed away from Wrigley Field.”

Grandpa Hall shares how he struggled and then opened Hall’s Nostalgia.  Flashing forward, the story ends with them ready to watch the Cub game from his rooftop.

Savorings for reading and in writing for Oliver’s Game: