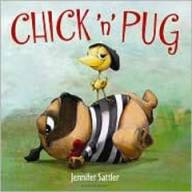 Chick loves stories of adventure. He daydreams of meeting the hero who fights off evil. The chicken coop is too dull with its daily duties of pecking, laying eggs, and sitting. Chick wants more.

Jennifer Sattler creates a fun read in Chick ‘n’ Pug. Heading out, Chick finds a pug. Chick is thrilled! At last he has found his hero. In contrast, the illustrations portray pug as an ordinary, lethargic pup trying to sleep. Believing his hero is exhausted from a heroic conquest, Chick marvels at Pug. He wants to be just like Pug. Chick has visions of strength and wit.

When an intruder (a cat) appears on the scene, Chick decides to help his hero out and defeats the foe with a LOUD bark. Hooray!  Too cute!

Savorings for reading and in writing for Chick ‘n’ Pug:

This entry was posted on Monday, July 11th, 2011 at 4:40 pm and is filed under Love of Reading. You can follow any responses to this entry through the RSS 2.0 feed. You can leave a response, or trackback from your own site.

One Response to Adventurous Hero