Living in an age of super heroes – Iron Man, Batman, Fantastic Four, children sometimes forget that ordinary people can be heroes too.  Laurie Halse Anderson created a new super hero in her book, Thank You, Sarah:  The Woman Who Saved Thanksgiving.  She begins by talking to the reader:

“You think you know everything about Thanksgiving, don’t you? …

After making you think for a moment, she responds to you:

The voice of Laurie Halse Anderson resonates through the story.  The reader is drawn in immediately.  When I read Thank You, Sarah, I feel like I’m having a conversation with the author.  Matt Faulkner, illustrator, adds a humorous touch to the story with his visuals.  His illustrations support the “talk” that the author has created.  Laurie then adds in some of the history of how people were forgetting about Thanksgiving and how Sarah Hale became the super hero.  A repeated line is used throughout the writing:  “She was bold, brave, stubborn, and smart.”  It supports the snapshots of Sarah Hale’s achievements in history.

Thank You, Sarahis one of the best texts to support persuasion.  Laurie writes, “And Sarah Hale had a secret weapon… a pen.”  She continues to show how Sarah Hale wrote and wrote and wrote to persuade people on issues during a time that women were considered second class to men.  She wrote to four presidents asking to make Thanksgiving a national holiday.  All of them told her no … until she wrote Abraham Lincoln during the Civil War.  He then said yes.  Thank You, Sarah!!  And thank you, Laurie Halse Anderson for writing such a brilliant book that will draw children into the history of the season and also to demonstrate the power of the pen.  Children need examples of writing for a purpose!

Savorings for reading and in writing for Thank You, Sarah:  The Woman Who Saved Thanksgiving:

End note:  I discovered a teacher’s guide for Thank You, Sarahin Laurie Halse Anderson’s website.  Because I love history, I found it intriguing that the author is a distant relative to Sarah Hale.  Read it in Social Studies section on the teacher’s guide.

The Rest of the Gettysburg Story 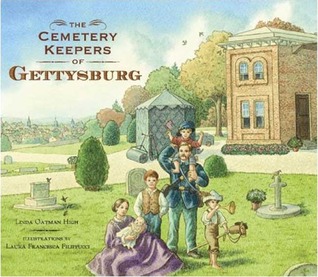 uthor’s notes provide added background knowledge for deeper understanding.  It often gives more to the story, and so I often will read it first (although its usually placed in the back).  Linda Oatman High was intrigued by the history of the Gettysburg Battled and learned of the heroic determination of Elizabeth Thorn.

The Cemetery Keepers of Gettysburg is written in poetic narrative, and it moves me.  The story is told through the eyes of the Thorn’s eldest seven-year-old son, Fred.  The Battle of Gettysburg was “the most ferocious and bloody battle of the Civil War“, and Linda Oatman High captures the emotion of the wounded soldiers, the fear-gripped children, and the devastation left behind. Although the battle was horrible, Linda’s words are poetic and rich and appropriate for upper elementary-aged children.

Linda Oatman High then tells the rest of the aftermath.  Nearly one hundred soldiers lay dead.  Elizabeth Thorn (six months pregnant), her father, and Fred dig the graves to honor the men.  Astounding!  The story ends with President Abraham Lincoln giving the Gettysburg Address and then honoring Elizabeth for her heroism.  Wow!  I have to read and reread this book and each time I focus on something new.  This book is excellent for developing background knowledge for the Civil War and provides good discuss on what families did behind the scenes. Savorings for reading and in writing for The Cemetery Keepers of Gettysburg: