Matt Faulkner is one of my favorite illustrators. He has written/illustrated the book A Taste of Colored Water and illustrated Thank You, Sarah, among several 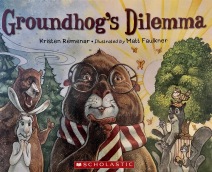 others. His illustrations strike me with a brilliant personification and invitation into the reading. Click to read a little about Matt Faulkner’s illustrations and to see a picture of him and his wife, Kristen Remenar. (I learned something new today.)

Together they created a fun read, Groundhog’s Dilemma, that highlights a predicament kids can relate with. Half of the animals want winter to last longer and half of the animals want spring now. Each animal tries to persuade Groundhog to predicate what they desire. Groundhog agrees with everyone, because he wants them all to be his friend. In the end, Groundhog explains he just reports what he sees; he can’t change the weather. This book provides you the opportunity to talk with kids about being truthful. It touches on persuasion, pressure, and contemplation. I think you will find the book will spark some interesting conversations.

Savorings for reading and writing for Groundhog’s Dilemma:

Spike: the Ugliest Dog in the Universe

A dog shares his story of being branded with a label, left abandoned and then rescued by a boy, who needs someone too. The boy tries to persuade his mom to let the dog stay.

Debra Frasier shares her story behind, Spike: the Ugliest Dog in the Universe, as the author and illustrator. She then invites you to write a story alongside you. (Teachers: scroll down and find several activities linked to this book.)

Savorings for Spike: the Ugliest Dog in the Universe:

Karen Kaufman Orloff captures the voice of a child begging to change his circumstances. Kids are the best at persuasion. They insist. They give reasons. And they insist some more.

In I Wanna Go Home, Alex isn’t not thrilled with going to his grandparents instead of staying with a friend. His view point is limited. David Catrow captures the many faces of Alex as his perspective changes. The reader learns of his pleas to his findings to his adventures through letters (a delightful writing habit that many kids may not even recognize.)

Karen Kaufman Orloff has created a website with activities linked to her I Wanna books. Clink on the link here to see ways to use this text for persuasive writing.

Enjoy hearing from Karen in this 2 min video.  (Read an interview with Karen about writing this book.)

Savorings for I Wanna Go Home:

Have I got a book for You!

Have I got a Book for You! – Really, I do. The voice of Mr. Al Foxword is superb. In all of his flattering-salesman pitch, Al works his magic. He begins by showing his customers are satisfied. He is the #1 seller of products that satisfy. Melanie Watt has created another attention-grabbing, fun-loving book.

I love how he engages me, the reader, into wanting his book called “Have I got a Book for You!” (Yes, it is the exact replica of the book you are reading.) The book mimics the commercial ads on everyday TV. This book would make a great mentor text for persuasive writing.

Delightfully, some fourth grade students narrate the book in the following YouTube video. It gives you a glimpse into the writerly voice Melanie Watt uses.

Savorings for reading and in writing for Have I Got a Book for You!:

Living in an age of super heroes – Iron Man, Batman, Fantastic Four, children sometimes forget that ordinary people can be heroes too.  Laurie Halse Anderson created a new super hero in her book, Thank You, Sarah:  The Woman Who Saved Thanksgiving.  She begins by talking to the reader:

“You think you know everything about Thanksgiving, don’t you? …

After making you think for a moment, she responds to you:

The voice of Laurie Halse Anderson resonates through the story.  The reader is drawn in immediately.  When I read Thank You, Sarah, I feel like I’m having a conversation with the author.  Matt Faulkner, illustrator, adds a humorous touch to the story with his visuals.  His illustrations support the “talk” that the author has created.  Laurie then adds in some of the history of how people were forgetting about Thanksgiving and how Sarah Hale became the super hero.  A repeated line is used throughout the writing:  “She was bold, brave, stubborn, and smart.”  It supports the snapshots of Sarah Hale’s achievements in history.

Thank You, Sarahis one of the best texts to support persuasion.  Laurie writes, “And Sarah Hale had a secret weapon… a pen.”  She continues to show how Sarah Hale wrote and wrote and wrote to persuade people on issues during a time that women were considered second class to men.  She wrote to four presidents asking to make Thanksgiving a national holiday.  All of them told her no … until she wrote Abraham Lincoln during the Civil War.  He then said yes.  Thank You, Sarah!!  And thank you, Laurie Halse Anderson for writing such a brilliant book that will draw children into the history of the season and also to demonstrate the power of the pen.  Children need examples of writing for a purpose!

Savorings for reading and in writing for Thank You, Sarah:  The Woman Who Saved Thanksgiving:

End note:  I discovered a teacher’s guide for Thank You, Sarahin Laurie Halse Anderson’s website.  Because I love history, I found it intriguing that the author is a distant relative to Sarah Hale.  Read it in Social Studies section on the teacher’s guide.