A few weeks ago, I reflected on the beginning of the year. I realized a stumbling block to my reviewing books and decided I didn’t like it. The realization sparked a plan to change. Taking a personal day, I took two bags of books, my sticky notes, and computer to the nearby Starbucks. Books laid out, pen in hand, I wrote. I had so much fun. I laughed at books, trying to hold my chuckles in. (I’m sure the groups of men around me wondered what I was up to.) I found a system I can manage and am happy. 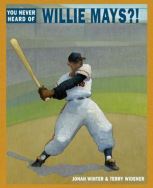 In the height of the World Series, one Giant’s player needs to be highlighted: Willie Mays. He is one of the best all around baseball players.  In You Never Heard of Willie Mays?! Jonah Winters shares how Willie’s hero, Joe DiMaggio, inspired Willie to play hard. His natural talent mixed with determination and fatherly coaching, Willie worked at perfecting his baseball skills. By age 15, his career in the Negro Leagues began.

In 1951, Willie Mays was drafted by the Giants, rejuvenating the team with his intense effort. In the 1954 World Series, Willie made an incredible catch  – and was viewed by millions of people on TV.

“You could fill a whole book with all the jaw-droppin’ plays Willie made, all the homers he hit, all the bases he stole.”

Savorings for reading and in writing for You Never Heard of Willie Mays?!:

SOLSC: Thinking Through My Fingers

I love this quote:

Writing, to me, is simply thinking through my fingers. — Isacc Asimov

Isn’t that what we do? We write and think and write and think. And then we think some more. I guess it is one reason why I like to use paper and pen. I can jot my thoughts and think, leaving the open page nearby as I go about my chores. On Sunday, my youngest did something that made me chuckle. I didn’t want to lose the memory, so I grabbed a pen from my purse and began writing on our bulletin. I was trying to capture the essence of the moment as quickly as I could.

Other times, like now, I stop and think. Palm under my chin, I reread and talk to myself. The computer awaits my tapping fingers to mold the words my audience will understand. With every tap, my fingers grasp my thinking.

What thinking are you doing through your fingers? 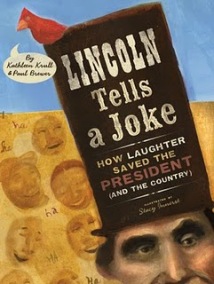 Lester Laminack spoke at the AllWrite!!! Summer Institute this past Tuesday. His sense of humor engages his audience. His session was on the importance of the right kinds of details in writing. I’ll share that later.

The important tip Lester shared was on laughter. He said laughter releases endorphins. Endorphins allow the brain to be flooded with energy and thus our students learn better. Lester then challenged us by having 4 to 5 one liners in our back pocket to use when our students seem to be dull and not awake. It will grab their attention and give them a boost.

I’m glad. Maybe that’s why I love to laugh. Laughter releases a lot of good feelings. I guess that’s why I was drawn to the book, Lincoln Tells a Joke: How Laughter Saved the President (and the country). Kathleen Krull & Paul Brewer  share how Abraham Lincoln used laughter to win people over and help lighten a serious moment.

Throughout the book, you will find quotes from Abraham Lincoln. I find them fascinating and I think your students will enjoy them as well. This book is a great way to introduce biography. The richness of the text is packed with information yet will not bore the reader. In fact, the voice of the authors make you want to read on.

Savorings for reading and writing for Lincoln Tells a Joke: